skip to main | skip to sidebar

People play games for many reasons. Some for the multiplayer, some for the challenge, some for the high score or nowadays the achievements. But what drew me into video games was the experience. Basically games that gave me an interesting world to explore and a compelling story to give it context. That said, compelling stories in video games are few and far between. To be frank most video game developers couldn't write themselves out of a cardboard box. But instead of bitching about how bad most video game stories are, (I'll save that for another post) I thought I'd point out a few that I really enjoyed. 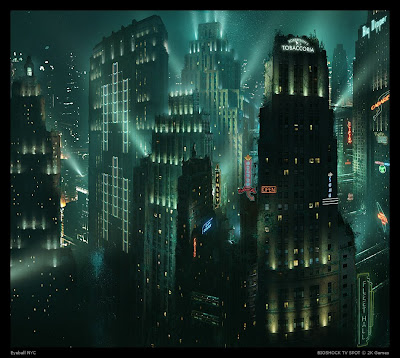 Bioshock : Based off the book “Atlas Shrugged”, Bioshock takes place in the underwater dystopian city of Rapture. You play as the voiceless Jack, a passenger on a trans-Atlantic flight who finds himself in Rapture after his plane crashes into the ocean. I will say that the story starts out a bit contrived as you never get any reaction from Jack as he enters this dark and mysterious world. That coupled with the fact that most of your communication with Atlas (your main contact in the game) comes off as a narrating tutorial. But unlike other games with these problems, this was intentional and does factor into the story later on in the game. 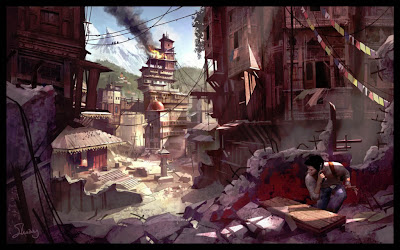 Uncharted 2 : Uncharted 2 doesn't have the most original story, basically if you've seen any Indiana Jones movie you've got the gist of it. But I will give it mad props for execution. The characters are interesting, the dialogue is sharp and the cut-scenes feel natural. You don't have a bunch of characters standing around in a circle, occasionally waving there arms, explaining what they're going to do next. It's cinematic storytelling at it's finest.

Heavy Rain : If you ever wondered if video games could tell a story that didn't involve aliens trying to take over the world or a dragon that needs to be slain, well Heavy Rain proves it can. You play from the point of view of 4 separate characters as they try to track down the Origami Killer. Unlike most games you can really tell the developers know how to tell a story. They don't sit back with some long-winded speech explaining who these characters are, they show you and let you experience it for yourself. Now some people may complain that it's more of an interactive movie than a video game, or that there are some plot holes in the story, but that's fine with me. Considering how unique and ambitious this game it's bound to have a few hiccups. 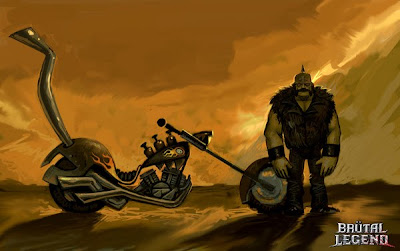 Brutal Legend : I can't say too much about Brutal Legend cause unlike the other games I haven't finished it yet. But what I will say is that it's funny. Then again with Tim Schafer and Jack Black how could it not be. Even if you're like me and you're not a Heavy Mental or RTS fan you'll still find it entertaining. Plus it features the voice talents of my favourite mail clerk Brian Posehn, how could you go wrong. 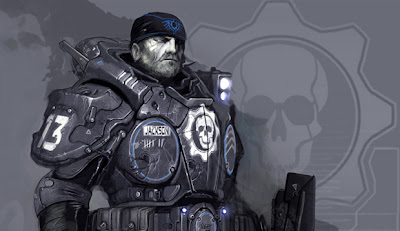 Gears of War : Okay I know what you're saying, I was with you to this point but now you've jumped the shark. Well hear me out. This isn't Citizen Kane here and it's not supposed to be. Yes it has a basic plot, find hive, blow up monsters. Yes it has some 3rd act problems where they don't explain your mission properly. Yes the characters can be crude and obnoxious, but they're supposed to be. The soldiers in the Predator or Aliens movies weren't exactly the most sophisticated but know one holds that against them. I think what I really liked about the first Gears is how they slowly unveil this world to you. Sure there's lots of action sequences but they also slowed down the pace, more like a survival horror game than an action game. And it really felt like you were a small piece in this massive war, not this end all and be all hero that is single-handedly going to win the war for you. You just happened to be in the right place at the right time. Then Gears of War 2 came along and threw all that out the window. Fuck You Gears of War 2!
Posted by Jaison at 11:29 PM